The Heart of a Flower

Here is a very funny story that Grace Kelly (then Princess of Monaco) told about Clark Gable in her book "My Book of Flowers" .

"I remember the story of Clark Gable, who was in Cornwallin the Autumn of 1952, making a picture that was directed by the late Delmer Daves [the picture was "Never Let Me Go" with Gene Tierney] . They were on location in a little village. The sets were being changed and the work was taking longer than had been anticipated. Ever conscious of his stars well-being, the assistant director said to Clark Gable, 'Why don't you and Delmer take a little drive in the country, and by the time you're back we'll be ready for you?' Once they left the villiage in the car, they were in virgin country. Delmer Daves was a remarkable man. He was fascinated by every aspect of nature - botany, biology, geology - all the natural sciences that explain the wonders of the earth. He always carried a jeweler's magnifying glass to look at specimens that interested him, whether they were rocks, flowers, or insects.
When something went wrongwith the automobile, Delmer was not the least concerned and suggested that they take a walk. They were in the middle of nowhere when he suddenly said, 'Look! Look at that field of anemones over there,' and, turning to Gable, asked, 'Have you ever looked into the heart of a flower?' Gable, that down-to-earth gentle giant, replied, 'You're kidding!' With that, Delmer brought out his little glass and invited Gable to look for himself.
They were standing there deep in concentration when some people drove by and stopped to ask directions. They drove off, but, soon realizing who was standing among the anemones, turned the car back and pulled up again. The man said, 'I've been having a discussion with my wife as to why Clark Gable would be in a field in Cornwall. You are Clark Gable, aren't you?' Gable leaned all those six feet over and answered, 'My good man, have you never looked into the heart of a flower?'"
Posted by SEProductions at 7:29 AM No comments:

"Lovely to look at, delightful to know" . . . Irene Dunne Remembers

"Lovely to look at, delightful to know . . . "
Composer Jerome Kern wrote this song especially for actress Irene Dunne, who starred in the 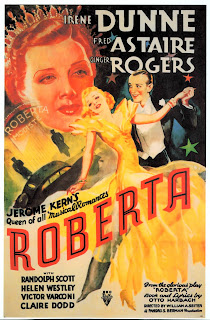 1935 film version of the hit musical play. Here she tells a funny story about filming the number.
'... the thing I'm proudest of was the song he wrote for me for Roberta, 'Lovely To Look At'. To show you how the mind can play tricks, I got so nervous over the song because I knew I'd have to be lovely to look at walking down that staircase, singing the song, that I got no sleep the night before and when I went in the next morning , the cameraman told the director, 'I'm not going to shoot her today. Tha's all there is too it. She'll have to go home and sleep'. We waited for a day or two, I rested up and then we shot it. . . . but the song I'm known for - if I walk into some place where they know me, they play 'Smoke Gets in Your Eyes'."
Posted by SEProductions at 9:00 AM No comments:

While filming the dramatic scene at the end of Dark Victory (the part where you know that she's going upstairs to die), Bette Davis stopped and asked the director, "Who's scoring this film? Max Steiner?" The director said he thought so. "Well," Bette declared, "either I am going up those stairs or Max Steiner is going up those stairs, but not the two of us together."

The great actors in Hollywood understood that a good music score was as important a part of each film as their own presence on screen, and that often looked like competition. While Max did go up the stairs with Bette (to the delight of fans everywhere), she wouldn't have seen it all put together until she saw the finished film. She wasn't going through her lines with the music softly playing in the background. From this side of the screen, they were an unstoppable duo. Twenty-one of Bette Davis' films, including some of her greatest roles, were scored by Max Steiner. Together, they made movie history.

Max Steiner (1888-1971) was one of the greatest film score composers in Hollywood, scoring hundreds of films from 1930-1965. He composed scores for films that are now considered classics, such as Gone with the Wind (1939), Casablanca (1942), and King Kong (1933).
A musical genius since childhood, Steiner studied under legendary composers Gustav Mahler and Johannes Brahms. Moving to the US as a young man, he began orchestrating and conducting on Broadway. With the advent of talking pictures, he was quickly brought in by the movie studios to help transistion from silents to talkies. Steiner was one of the first film
orchestrators/composers to create a musical score that was specific to the content of a scene and to give certain characters their own themes. Throughout his long and remarkable career he composed hundreds of film scores, some which are still recognizable today. Nominated eighteen times, he won Academy Awards for his scores for The Informer (1935), Now, Voyager (1942), and Since You Went Away (1944).