Screen legend Elizabeth Taylor died this morning, at age 79, after six weeks in Los Angeles' Cedars-Sinai Hospital for congestive heart failure. She was surrounded by her four children.

Known for her dark beauty and violet eyes, she was the winner of two Oscars and made over 50 films in a career which started in 1942

and went all the way through 2001. She starred in such films as Lassie Come Home, National Velvet, A Date With Judy, and The Taming of the Shrew (with husband Richard Burton). 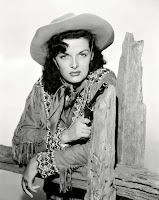 A strong Christian, she joined with some friends to create the Hollywood Christian Group which held services and Bible Studies at different movie people's houses. In 1954, Jane, Connie Haines, Beryl Davis and Della Russell joined together for a Church benefit and sang a Gospel song. A representative of Coral Records heard them and asked if they would record the song, which ended up being a million-seller. The same year, Della Russell left the group and was replaced by Rhonda Fleming. (The video below is from a TV appearance that they made in 1954, singing their hit song, "Do, Lord".) The singing group, known as The Four Girls, spent three years performing together and touring

the Country. They even recorded a hit album entitled Make a Joyful Noise. In 1957, Rhonda Fleming left the group to fulfill acting commitments and the others renamed the group Les Girls, continuing for the rest of the decade as a trio. During and after this time, Jane Russell also created and helped organizations that helped adopt children into the US and worked at getting the Bible put back into public school curriculum. Now she is with her Saviour in Heaven and truly happy.

"Without faith, I never would have made it. I don't know how people can survive all the disasters in their lives if they don't have any faith, if they don't know the Lord loves them and cares about them and has another plan."

Click here to read a bio from Pointing North.