I found a very interesting article in one of my old Deanna Durbin scrapbooks. It appears to be from a music magazine, and describes everything that goes into making one three minute song in a film.

"In her newest starring vehicle, "IT'S A DATE" (Universal), Deanna Durbin sings Musetta's Song from "La Boheme"; Loch Lomand; Schubert's Ave Maria; and Love Is All, by P. Tomlin and H. Tobias. A scientifically minded film fan, holding a stop watch on the average Durbin song, would discover that he was getting three minutes of melody. What he could not discover is that he is also getting the benefit of several pieces of chalk, five hundred fifty feet of celluloid, and seven hundred seventy-six work hours of ninety-seven experts. The singing itself, which seems no more complicated than allowing Miss Durbin to send out her tones, is in reality a very involved piece of work.
Take, for instance, the rendition of Musetta's Song. The aria is first sung into a microphone in a sound room, to the accompaniment of a fifty piece orchestra, under the direction of Charles Previn. The chalk was used to write the words of the song in large letters on a blackboard high on the wall facing Miss Durbin, as is the custom in all screen singing. In the action of the picture, Miss Durbin sang the aria again, in a Hawaiian ballroom scene. This time it was photographed but not recorded, her silently filmed lip movements being later synchronized to the previously recorded song. For her gown in this scene, used once and then discarded, the services of one designer and six seamstresses were needed. Also, active in the "shooting" were one make-up man, one hairdresser, one script girl, two camera men, one assistant director, one dialogue director, and an orchestra of fifteen musicians, whose accompaniment, like the photographed song, were filmed but not recorded. An average eight hour work day was expended by each of these experts, either in filming or recording; and other specialists in the cutting room, the library, and various departments, complement the full count of ninety-seven experts needed to bring a single song to the public."

(Here are some photos of Deanna Durbin recording "I Love to Whistle" for her 1938 film, Mad About Music.) 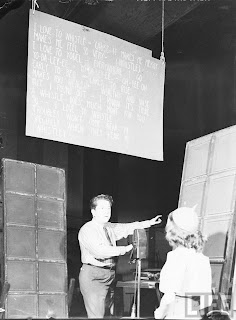 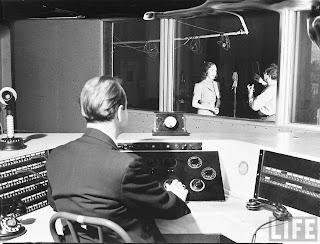 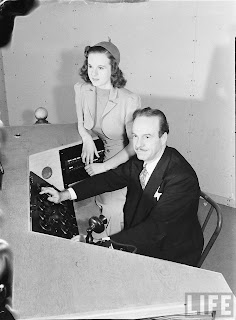 Posted by SEProductions at 9:44 AM No comments: