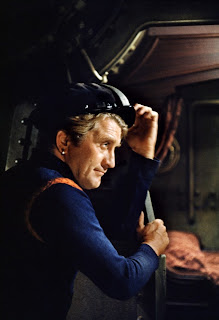 Today we wish classic actor, Kirk Douglas a "Happy 95th Birthday"! He is a fantastic actor and played in a variety of roles, from 20,000 Leagues Under the Sea to Gunfight at the OK Corral. He even recorded his own record! In his long and eventful career, Mr. Douglas has made over 90 film and television appearances and has been nominated three times for the Best Actor Oscar and in 1996 he was presented with an honorary Oscar in "50 years as a creative and moral force in the motion picture community."
Posted by Anonymous at 12:45 PM No comments:

America's Singing Sweetheart of the '30s and '40s celebrates her 90th birthday today. Following her overnight success with the release of her first film, Three Smart Girls, in 1936, Deanna Durbin became one of the most popular Hollywood stars worldwide. When she got her first screen kiss in 1939, it pushed the war news off the front pages of many newspapers! There was a line of clothing called "Deanna Durbin Cinderella Frocks" and there was even a "Deanna Durbin Doll".

Her Hollywood star soared brightly for twelve years, leaving behind 21 feature films, several short films, lots of recordings, loads of memorabilia and many fans with unforgettable memories. For all the fame, Deanna was never happy with Hollywood, the studio system, and the star fixation of the fans. In 1948, after the release of For the Love of Mary, she packed up and moved to France. There she met and married Director Charles David (who actually directed her film, Lady on a Train). They settled down in a farmhouse and raised her daughter, Jessica, and their son, Peter, who was born in 1951.

Today she celebrates her 90th birthday, and is still remembered by many fans across the world. You can still experience her beautiful voice on home video and cds. Who can forget the first time she came onto the silver screen? Her voice soaring over a lake surrounded in pine trees. "My heart is singing . . ."

Posted by Anonymous at 6:29 AM No comments: