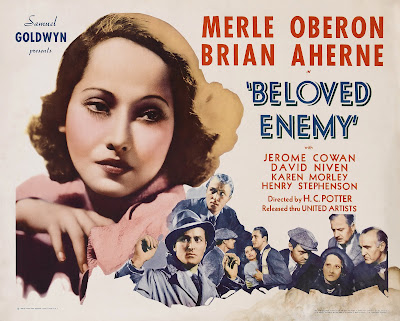 Beloved Enemy is a love story set in 1921 during the Irish Revolution, starring Merle Oberon and Brian Aherne.
Dennis Riordan (Brian Aherne) is the leader of the Irish Rebels. He is still at large because the British do not know what he looks like. Lord Athleigh and 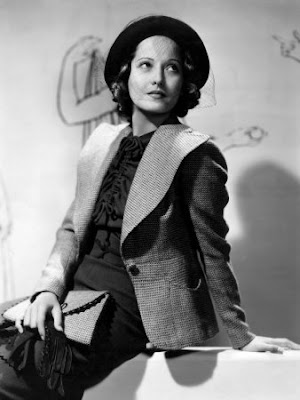 his daughter, Lady Helen (Merle Oberon), arrive in Dublin to try to find a peaceful solution to the Irish uprising. Dennis meets Lady Helen under a false identity and they end up falling in love. When she accidently learns his true name, she discloses his whereabouts to the British authorities who arrange an ambush for the next day. Riordan escapes and refuses to believe that Lady Helen was the one who betrayed him. They arrange a secret meeting and she admits that she betrayed him, saying that her action proves they can never be close. Each is unwilling to leave though, and they both declare their love.

Unknown to Lady Helen, the Colonel in charge of the British Occupation had her followed to their secret place. The military surrounds Riordan's flat and prepares to move in. Riordan and his friend, O'Rourke, escape over the rooftops and evade capture. That night Riordan swears that he will never see Lady Helen again. Lord Athleigh takes Helen back to London that night and also makes her promise never to see Riordan alone again. 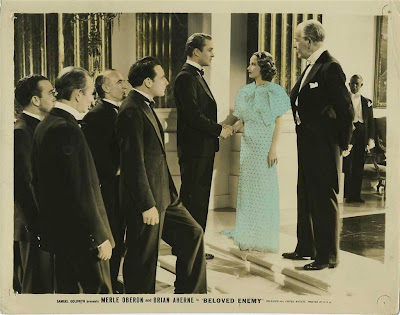 Lady Helen pursuades her father to fight for a peaceful solution to the Irish problem. He succeeds in getting a temporary truce and safe conduct for an Irish delegation to come to London in order 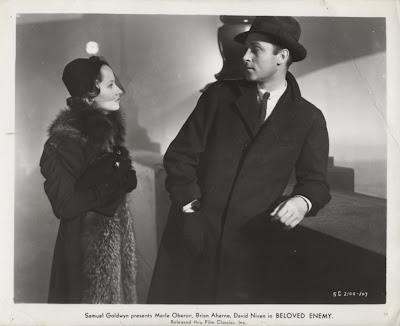 to discuss a treaty. Dennis and five of his men come, but the two countries are unable to come to an agreement. One night, Riordan takes a walk alone, and Lady Helen finds him, trying to convince him that peace would be better than war. He signs the treaty the next day and bids Lady Helen a sad farewell as he returns to Dublin with the treaty.

Minutes after Riordan has bid her goodbye, Lady Helen learns that He is going home to great danger. Members of his party who wanted war more than peace would most likely kill him the next day. Lady Helen takes the first boat to Dublin the next morning. She finds out that Riordan is going to be assassinated that night at a rally. She hurries away and arrives in time to see him shot as he stepped into his car. She manages to get into the car and they rush to Riordan's flat. Once the doctor has seen him she is allowed to go to him. He tells her not to worry, that he isn't going to die. After all, "a good Irishman never does what's expected of him". Happy music and a beautiful close-up of the two stars brings the film to a very satisfying ending!

This is one of my favorite films. Originally titled "Love Under Fire", the first ending of this film had Dennis shot and killed. However, after the film didn't do well in the box office, they replaced it with the happier end that is played today. Only 87 minutes, the story never bogs down. There are enough light moments to keep this from being too dark of a film. Miss Oberon and Mr. Aherne are perfectly matched and the supporting cast is just as good. David Niven is definitely a stand-out as Lord Athleigh aide. Although it is set in 1921, the costumes are obviously 1936 styles. But authenticity can be forgotten when Miss Oberon looks so grand in the current styles. When this film came out in '36, 1921 styles would have looked simply outdated!

Click here to watch a scene from Beloved Enemy.

Read the 1936 NYTimes movie review.
Posted by SEProductions at 10:17 AM No comments: