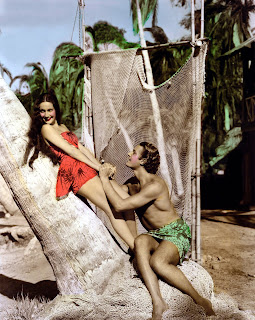 "She pulled out some beautiful cotton print material and began to drape it around me. Beginning to daydream of all the beautiful gowns, glamorous hairdos, and magnificent jewels that I would soon be wearing, I asked how many dresses I would wear in the film. 'Dresses?' she exclaimed. 'Young lady, this is going to be a sarong!' I had to admit to her that I didn't know what a sarong was. She laughed, and when she explained, all my hopes of a glamorous movie debut flew out the window."

(Dorothy Lamour on her film debut in "Jungle Princess".)

Although Dorothy Lamour only played about six roles where she was was clad in a sarong, it became her trademark throughout her career, even though she disliked the entire image. Her most memorable roles are those opposite Bing Crosby and Bob Hope in the "Road to . . . " series. Together they created an ad-libbing comedy style that has never been equaled and they remained lifelong friends, often making guest appearances in each other's films. "I felt like a wonderful sandwich, a slice of white bread between two slices of ham." Even so, she always managed to hold her own with the two 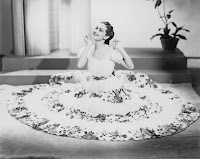 of them. During World War II, she was called the "Bond Bombshell" for her work selling War Bonds across the country. She was the first celebrity to use her fame for selling Bonds, selling over 300 million dollars of Bonds alone. By the 1950s her career was declining and she only made a handful of films. Some of her better known films ,other than the "Road To" films, are "Hurricane" (1937); "My Favorite Brunette" (1947); "Johnny Apollo" (1940); and "The Greatest Show on Earth" (1952).

Click here to hear Miss Lamour sing her theme song "The Moon of Manakoora" (from the 1937 film, The Hurricane).

To see more photos of Dorothy Lamour, click one of the photos at the top to be directed to Dr. Macro's High Res Scans.

"I made 60 motion pictures and only wore the sarong in about six pictures, but it did become a kind of trademark."
Posted by SEProductions at 1:16 PM